Book: From Sovereign to Serf - Government by the Treachery and Deception of Words by Roger Sayles

The United States is only the second country in world history where man has been able to receive God-given, Natural Rights – rights ‘they’ have tricked you into voluntarily trading for a citizenship status that amounts to slavery. Legally, you are merely an asset owned or pledged by the federal government as collateral toward our nation’s debt.

In From Sovereign to Serf – Government by the Treachery and Deception of Words, author Roger Sayles not only inspires you to stand up for your God-given rights and against government tyranny; he gives you the means to do so. 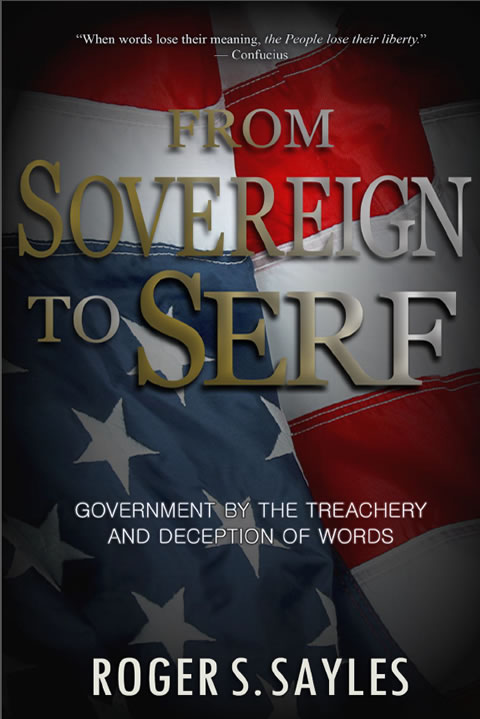 From Sovereign to Serf documents the very techniques the U.S. Federal Government uses to convert your RIGHTS into PRIVILEGES and establish totalitarian control over us all. Masterfully clear and well documented, you will not find a better explanation of how we have evolved from a nation of sovereign citizens with God-given, constitutionally protected liberties into a rogue police state of corporate slaves subservient to a faceless 1%.

From Sovereign to Serf is a very powerful book. Over 240 pages, it represents more than 70 years of exhaustive legal research, study and sacrifice by three great Americans — teachers and patriots — who have dedicated their adult lives to not only understanding the concepts explained in From Sovereign to Serf, but also to educating the public.

Don’t let the title mislead you.

From Sovereign to Serf is not another book about the warmed-over sovereign citizen theories with which you may already be too well acquainted.  John Benson and Glenn Ambort actually served 14 combined years in federal prison solely for teaching the truths revealed in this book.

Armed with the knowledge contained within From Sovereign to Serf,  the author, Roger Sayles, has successfully restored his God Given, Constitutionally protected Rights using what he calls, “the deceitful moniker of U.S. National.”

“U.S. National” is the original citizenship status established by our Forefathers. We have been tricked into ‘volunteering’ into the English/European version of literal slavery. They OWN your body – illegally.

If you’re skeptical about the status “non-citizen U.S. National,” simply check the oath on a passport application. (Surely you would look there for your rightful and correct political status,now wouldn’t you?)

As very correctly stated in the passport application instructions under the OMB Number section,

You are not required to provide the information requested on this form unless the form displays a current valid OMB number. We try to create forms and instructions that can be easily understood. Often this is difficult to do because our citizenship laws are very complex.

A greater understatement has never been published by the United States federal government.

The federal government will not explain our citizenship laws to you nor how they are applied.From Sovereign to Serf does though,  in great detail.

Roger Sayles has done a masterful job, in fact, of enumerating exactly where our rights come from, how they are interpreted legally and how they have been continually eroded since virtually the inception of the Republic — and certainly since the Fourteenth Amendment and subsequent legal deceptions.

I have not seen a clearer, better-documented explanation of how a de facto federal government has tricked us out of our God-given, constitutionally protected liberties and into volunteering for a legal status of slavery.

The proof, reproduced at the back of the book, is a legally executed and filed Affidavit of Citizenship that has been accepted and stands to this day UN-rebutted.

Roger has used that affidavit on six different occasions, including to obtain a Florida photo ID, his social security retirement benefits and an official U.S. Passport (on three separate occasions,) all while claiming what he believes to be his rightful, sovereign status as a U.S. National.

Not once has Roger Sayles’ affidavit of citizenship been questioned, refused or rebutted.

I, (name), being of sound mind and lawful age, do solemnly declare:
1. I am a freeman, born on the land of (State), of parents who were white, who were Citizen-Principals and whose parents time out of mind were and always had been white. As an hereditament I acquired directly the status of Citizen-Principal of said state sharing equally in its sovereignty. Slaughterhouse Cases, 83 U.S. 36 (1873).
2. As a white man, born on the land of Florida, I am not restricted by the 14th Amendment, and because I receive no protection from it, I have no reciprocal obligation to a 14th Amendment allegiance or sovereignty and owe no obedience to anyone under the 14th Amendment. United States v. Wong Kim Ark, 169 U.S. 649 (1898).
3. I am a free Citizen of the aforesaid state of my birth and derivative and mediate thereof I am also a Citizen of the united states of America as contemplated in the Constitutional Contract of 1787.
4. I am not a citizen of the United States as contemplated by the 14th Amendment, and I do not reside in any state with the intention of receiving from the Federal government or any other party a protection against the legislative power of that state pursuant to the authority of the 14th Amendment.
5. I am, therefore, “nonresident” to the residency and “alien” to the citizenship of the 14th Amendment.
6. As the tax imposed in 26 U.S.C.1, pursuant to 26 C.F.R. 1.1-1, is on citizens and residents as contemplated by the 14th Amendment, it is not an applicable Internal Revenue Law to me, as I am neither such a citizen or resident.
Notwithstanding the fact that I may have in past years filed U.S. Individual Income Tax Returns, such filings were done under mistake by me not knowing that such filings were and are mandated only on citizens and residents of the United States as contemplated by the 14th Amendment.
7. Furthermore, I am not a resident of any state under the 14th Amendment and hereby publicly disavow any contract, form, agreement, application, certificate, license, permit or other document that I or any other person may have signed expressly or by acquiescence that would grant me any privileges and thereby ascribe to me rights and duties under a substantive system of law other than that of the Constitutional Contract of 1787 for the united states of America and of the constitutions for the several states of the Union, exclusive of the 14th Amendment.
8. I reiterate that I have made the above determinations and this declaration under no duress, coercion, promise of reward or gain, or undue influence and of my own free will, with no mental reservation and with no intent to evade any legal duty under the laws of the United States or any of the several states.
9. I sincerely invite any person who has reason to know or believe that I am in error in my determinations and conclusions above to so inform me and to state the reason(s) they believe I am in error in writing at the location of my abode shown below.
_______________________________/
(Name) – sui juris, with express reservation of all my rights in law, equity and all other natures of law.
[ Rights Reserved: UCC 1-308, Florida Statute 671.207 ]
(address), (City), (State) [zip code]( County ) ( State of ? )
Signed before me this ?th day of (month) 2013, by (Name), personally known to me and who did take an oath.
_______________________________/
(Name of Notary)
My commission expires (date)
# (license number)
Bonded thru (Insurance company)
NOTARY PUBLIC – STATE OF ( )
COMMISSION – EXPIRES

There is a legal maxim dating back to Rome, still standing today, that proves the truth of the points raised in my personal affidavit and in those that other Americans, of whatever background, race or heritage, may choose to file in their county records: “silence deems consent.

To OBTAIN your Instant E-copy of From Sovereign to Serf, CLICK BUTTON ($4.99)

To obtain a printed copy of the book, CLICK HERE

I always enjoy hearing from my readers. Drop me a line, and I will do my best to respond! – Roger

11 thoughts on “Book: From Sovereign to Serf by Roger Sayles”